Autumn is the perfect time for outdoor activities; a crowd of people head to mountain areas to see the magnificent foliage.

Well, if you missed out on the peak foliage season, then how about going bicycling? If hiking is about getting to the top of a mountain, then with cycling, you get to savor the beautiful scenery and ambience you have so far overlooked.

The Korea National Park Service announced that they are going to add four more cycling courses to the existing four, so operating a total eight routes. 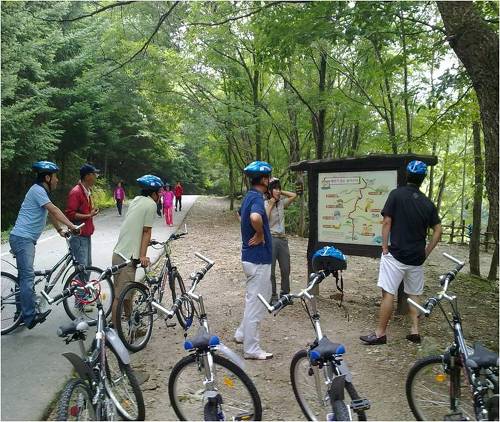 In the cycling programs offered at the Hallyeohaesang National Park and the Deogyusan National Park, you can rent bicycles for free at the respective park offices.

The Korea National Park Service is planning to create extra cycling courses of 20km at the four parks including Seoraksan, Naejangsan, Jirisan and Woraksan.

Choose a Course that Is Right for Your Capacity

<Cyclists on the 6km bicycle route at the Byeonsanbando National Park>

When cycling, it is important to choose a course that fits your strength and skills, and also to be mindful of safety instructions.

For example, if you are on a downhill road, you shouldn’t exceed 10km/h by applying hand brakes. As is common sense, you must wear a helmet as well as restrain from using mobile phones or ear plugs to listen to music. And also, should the unfortunate situation happens where on a downhill you’ve lost control of your bicycle, then you should rather let go of the handles instead of holding tight on to them, which is usually the instinct.

Remember, abiding safety rules aren’t only about your own safety; it’s as much about other cyclists and hikers’ who are near you.

If you are one of those who aren’t really into the taxing, energy-consuming hiking business, then you might want to consider trying a cycling program at the national parks!