Twenty Seoul-based foreign journalists on last November 19 and 20 visited the Jeju Olle Road as part of their Jeju Press Tour program sponsored by the Korean Ministry of Culture, Sports and Tourism.

The twenty foreign journalists, though still somewhat fatigued from the intense reporting they had for the G20 Seoul Summit, participated in the Jeju tour with great zeal and curiosity, especially for the much talked about Olle Road and Jeju haenyeo.

On the first day of their tour, Jeju greeted the journalists with an unusually clear, azure sky and a picture-perfect coast line.

At the center of attention in the tour was, of course, the haenyeo – Jeju’s sea women. A journalist for Tokyo Newspaper expressed his special interest for Jeju haenyeo, saying although Japan also has something like sea women he had never seen the Jeju haenyeo. As four, five haenyeo dove into the sea and began their “sea-picking” routine, the group of visitors all flocked to the water in excitement to take photos. 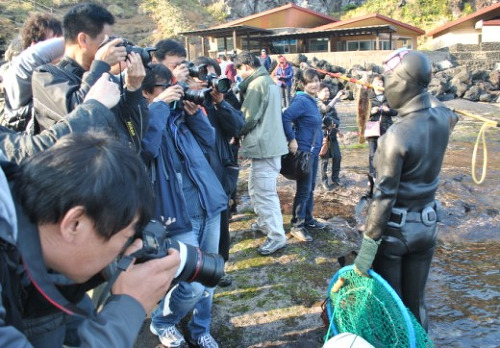 <The group of foreign journalists all flocked to the water in excitement to take photos.>

Haenyeo dive into 20m deep into the ocean and collect sea products, holding their breath for as long as two minutes. Holding breath is hard enough; but doing that in the middle of cold sea water, swimming AND collecting things? What an amazing feat!

As one of the haenyeo, a 76-year-old sea veteran, pulled out of the water and showed a “domchi” which is a very rare catch, a big applause erupted among the journalists. The elderly haenyeo has been sea-picking since the age of 15.

But sadly, what used to amount to 15,000 Jeju haenyeo has now plummeted to a mere 5,600. And most of them are in their sixties and seventies. Those in their thirties are just a handful now, less than a dozen. 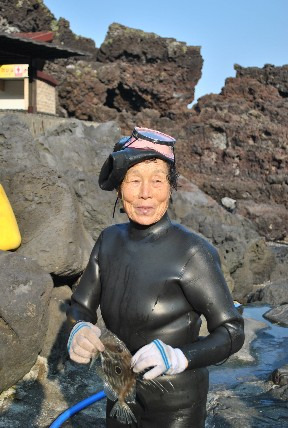 <As one of the haenyeo, a 76-year-old sea veteran, pulled out of the water and showed a ‘domchi’>

Perfect Harmony of the Sea and the Cliffs

The foreign journalists were once again amazed and awed by the beauty of Seongsan Ilchulbong, a peak that rose from under the sea in a volcanic eruption over 100,000 years ago.

Seongsan Ilchulbong is located on the eastern end of Jeju Island and there is a huge crater at its top. With the 99 sharp rocks surrounding the crater, it looks like a gigantic crown. While the southeast and north sides are cliffs, the northwest side is a grassy hill, forming a truly distinctive ambience.

The journalists concluded their first day with a visit to Chyeonjiyeon Waterfall, and their second day was finally the much anticipated Olle Road.

The Olle walking path opened its first route in 2007 and is now furnished with 22 routes of 357km. In the local Jeju dialect, “Olle” was originally used to refer to the narrow path between the street and one’s doorstep. The hiking trail was founded by Myung-Sook Suh who was inspired upon hearing from a certain English tourist that he had healed his hurt soul walking the Jeju roads. 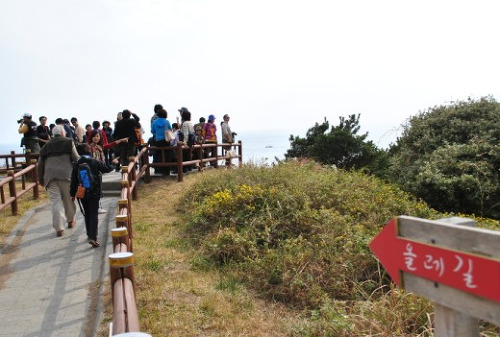 The route the journalists trod that day was Route 10 which is a course a little more taxing than a leisurely walk. You will be able to enjoy a scenic view of cliffs and the ocean. This particular route was declared as “Jeju Olle-Switzerland Friendship Road” last April upon establishing an MOU with the Swiss tourism administration. After the good amount of exercise followed, of course, a sumptuous meal composed of just-caught Jeju sea food and makgeolli.

At the end of the delightful tour, the journalists expressed their wish for having more nature-oriented tourist spots like the Jeju Olle Road. Although they may be somewhat less convenient than those equipped with first-rate technology and amenities, sometimes what we want these days are places that are preserved as they originally were – somewhere we can rest and heal our jaded souls.