Do you think it is possible to attract everyone in the world with a same food? It is not simply a question of Korean food. Even if it has an excellent taste, it is almost impossible to satisfy 7 billion people around the world. Nevertheless, there are many foreign dishes which became the beloved food among many countries.

For example, pizza of Italy, Sushi of Japan, Curry of India, and Pho of Vietnam are beloved by many people around the world with no validity term. Even though people don’t know where those countries are located, but they know exactly where the top gourmet restaurants are. Well then, let’s take a look inside the secrets of the globally successful food!! 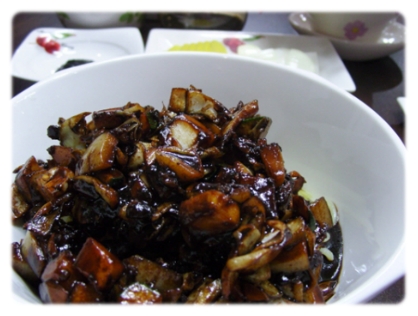 <The food that can’t be found anywhere in China, Jajangmyeon>

In Thailand, Jajangmyeon’ was selected as the most ‘want-to-try’ food of Korea among young people. It is a surprising result when considering that many Thailand the Korean drama and music are sweeping over the country. But in fact, Koreans themselves don’t regard Jajangmyeon as Korean food.

The name of Jajangmyeon was derived from the word ‘Zhajiangmian(炸酱面)’ in China. In the past, many Chinese ordinary people used to add ‘Chunjiang(椿酱)’, Chinese fermented soybean paste in the noodle. Like many Chinese who settled in other countries, Chinese in Korea also had this noodle, but in a little different way, adding caramel, vegetables and meats. As time goes by, the way of cooking Zhajiangmian and its ingredients have been changed to fit the Korean’s tastes, which is now Jajangmyeon.

There are a number of foreign dishes beloved by Koreans, even if they haven’t been changed as much as Jajangmyeon. For example, there is a huge difference between the Korea-made pizza and Italy-made pizza which is baked over stove. Unlike the original pizza with one or two fresh ingredients on its thin and crispy bread, the Korea-made pizza has a lot of toppings and sauce on its soft and thick bread. Yes, it was changed to fit the Koreans’ tastes who love soft and chewy food.

To be accurate, as the Italian pizza became Americanized in the U.S., many things including dough, ingredients and even the method of cooking were changed a bit. After then, the Americanized pizza arrived in Korea and it once again had a change. Even though many Koreans love pizza itself, there are still a lot of pizza companies which are trying to develop their pizza to fit the Koreans who are accustomed to spicy food. 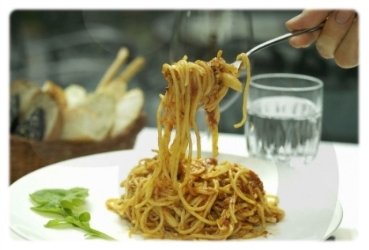 <Italian pasta with a minimum sauce> 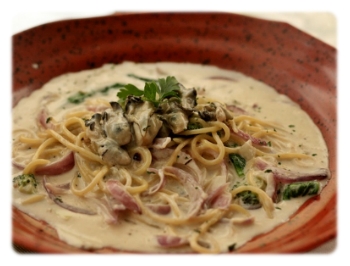 <Koreanized pasta with much sauce>

Pasta is a similar example. It came across to Korea not from Italy, but from the Italian restaurant in the U.S. and Japan. The Pasta was changed again in Korea, and got to have a new style and develop the new tastes.

Well, there is a significant difference between the pasta which is commonly sold in Korea and the original pasta, comparing the amount of sauce. The Italian pasta, which is a one of favorite dishes and courses among common people, originally has little sauce. However in Korea, people get used to have ‘one dish for a meal’, so the amount of sauce has increased like a noodle soup and satisfied their appetite.

Interesting fact here is that Kimchi or Gochujang(red pepper paste) added pasta is being exported overseas. People said that it is a reexportation of pasta. ‘Ramyeon’ is another example of the exported foreign dishes from Korea. First made in Japan, ramyeon which had arrived in Korea in late 1950s became one of the biggest trends ever. Since 2000, ramyeon industry in Korea has begun to rise rapidly, and exported ramyeon to Japan which is the home of ramyeon. Moreover, Korean ramyeon product was ranked the ‘globally recognized brand” by TokyoTV.

Successful Cases. We are More Delicious and Exclusive! 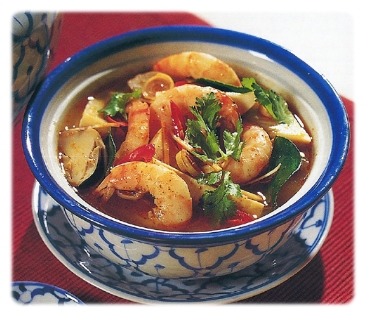 <Thailand dish which achieved globalization regardless of nation awareness>

Most of the South East dishes that are well-known among Koreans are from Vietnam, such as rice noodle and rice wraps. But in terms of generalization, there must be the Thailand dishes. Regardless of the nation’s competitiveness and image, Thailand dishes are getting more popular and popular with the support of public sectors and the government. Those support started from 2004, when they launched the slogan, Thai-ness, in order to globalize the Thailand dishes. For this reason, people around the world not only order the menu but also remember the Thailand culture and its nation brand.

The key to success is that they just let people try their dishes by recommending as they do to their friends. Opening the restaurant in neighboring countries, they stick to their original tastes, but in remote countries like U.S. they tried to change their dishes to fit their tastes. For the reason, the Thailand dishes in close countries, such as Laos, Malaysia and Cambodia still have the piquant and spicy tastes even though the ingredients are little bit different. On the other hand, in Korea or western countries, they are working on to remove ‘Pak Chee’, Thailand’s representative spices or add more sweetness and salty taste. Through this relative PR strategy, the number of Thailand restaurants all over the world increased over 13,000, comparing the 4,000 restaurant in 2004. 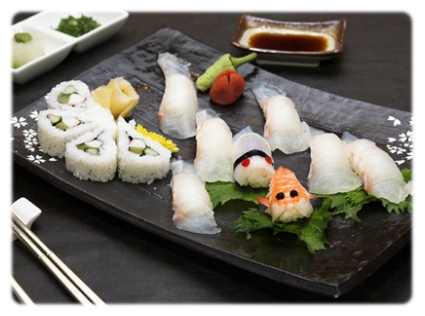 Japan has set out to attract over 1.2 billion from 600 million people to Japanese food by 2012. And in fact, the population enjoying the Japanese food is rapidly increasing. Especially the PR strategy which aims at spreading the image of sushi to Europe, U.S., Asia and Africa as a gourmet food of the upper ten was considered successful. In addition, they promote the export of Japanese food supplies with the scientific data that they can make best sushi with the food supplies from Japan, which became a role model for many countries.

In particular, they published the book ‘How to eat Sushi’ telling the history of Sushi and how to use the chopstick, and how to eat Sushi, which made Sushi closer to foreign people as a culture. Thanks to the concrete and systematic strategy, currently in U.S., there are 10,000 Japanese restaurants, which is almost a half of the total Japanese restaurant all over the world. 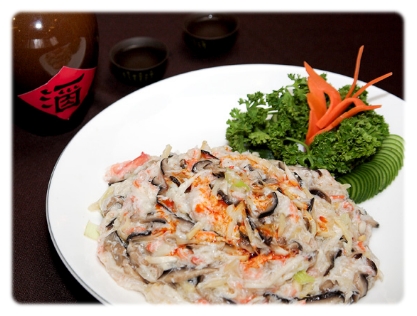 <Chinese dishes which became popular everywhere in the world>

Chinese restaurants have succeeded around the world with its own efforts to develop the menu, which differentiates them from the Japanese and Thailand restaurants that were supported by their governments. You will be surprised to know that the globalization of the Chinese restaurant already started 150 years ago, which is far earlier than their government’s PR strategy on food. In 1850s, for the Gold Rush in U.S., more than 25,000 Chinese moved over to the U.S. and the first Chinese restaurant Chow Chows’ opened. Naturally, Americans were fascinated by the cheap and plentiful Chinese food.

The Chinese restaurants which are well on the way to establishing itself in the U.S., soon expanded to the big cities and the suburb areas and became Americanized, focusing on increasing the number of enterprising franchises. Now, it opened over 40,000 Chinese restaurants, which is more than the number including McDonald, Burger King, and Wendy.

Korean Dishes in the World, Where do we stand? 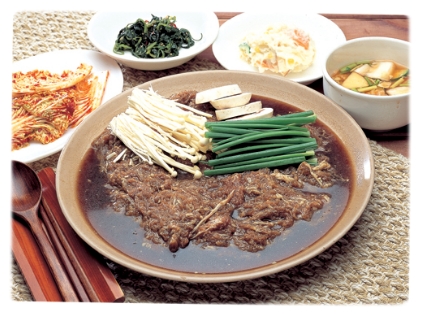 Taking a look at many successful cases of foreign dishes, you might wonder then, “What is the current position of Korean dishes”? So, we did analysis about the foreigners’ preferences on Korean dishes, such as Kimchi, Bibimbap, and Bulgogi which are considered known overseas. The statistics results were based on the Accenture Survey and Analysis implemented on June 2009.

First of all, 21% out of all foreigners who answered the survey came up with ‘Korean dishes’ from the word ‘Korea’. Most of them considered Kimchi is the representative food of Korea, and they were quite positive on its tastes, answering that it is rather spicy but very delicious. In particular, the Americans who participated in the survey answered that Korean dishes are mostly unique, inexpensive, and quite extensive. They also regarded that Korean dishes would be good to health and diet.

Meanwhile, ‘Bulgogi’ was selected the ‘most satisfactory dish’, recording 4.4 out of 5. Dakgalbi, which is spicy even to Koreans, got 4.3 unexpectedly. For the next, Bibimbap and Ddokgalbi recorded 4.2. Well, there are also other dishes that scored pretty low we need to check. Dongchimi noodles and Naengmyeon got around 3 points. It is expected that foreigners don’t like cold noodles.

Like many other countries which tried hard for globalization, we also need to be aware of the current status of Korean food, keep our own traditional value and develop the localized recipe by country. Then one day in the near future, we can enjoy Korean food with all of our friends in the world.

The images posted on this article are just for helping understanding, and they are not directly related to the contents of this article.